LAS VEGAS, April 3 - U.S.-based, international humanitarian organization Clitoraid, which offers clitoral repair surgery to victims of Female Genital Mutilation (FGM), has been honored by Shinto High Priestess Hisae Nakamura, owner of the Shinto Shrine in Kawazaki, Japan. In accordance with this new recognition, Clitoraid's vulva logo will be displayed during the Shinto celebration, Sunday April 5th,​ ​where​ penis statues​ ​are paraded in the streets​, according to a statement released today by Clitoraid.

"This honorable invitation is highly symbolic,” said Lia Steinman, Clitoraid’s U.S. spokesperson, who was born in Japan. "Clitoraid's vulva logo is the result of an artistic collaboration with Japanese artist Rokude Nashiko, who is currently awaiting trial and a possible jail sentence in Japan for displaying her extensive vulva art work there. In Japan, the public display of female genitals, even in art, is forbidden. Our participation aims not only at raising awareness regarding the taboos that surround the vulva and the clitoris but also to renew our support to Rokude Nashiko.

Head Priestess Nakamura explained: "Originally, our shrine was dedicated to both the penis and the female genitals as symbols of fertility, prosperity, and happy couples, but the public and the media have focused only on ​ the​ p​enis ​ tribute​. So many people misunderstand about the shrine worshipping only the penis."

​“In accordance with the humanitarian vision of Maitreya Rael, who founded Clitoraid in 2004​, our organization works toward restoring sexual pleasure in women whose basic human right has been trampled for centuries,” Steinman said. “Whether women are victims of extreme physical violation, such as female genital mutilation, or victims of a more subdued psychological and cultural violation, as in modern Japan, our goal is to restore their dignity and ability to experience pleasure ​without shame or guilt​."

​To emphasize the importance of female genital pleasure and women's dignity around the world, Clitoraid has established Clitoris Awareness Week during the first week of May, Steinman said.

“During this special week, we educate the public about the clitoris and celebrate this magnificent female organ, which was vilified far too long, yet is so vital to women's inner-balance and self-esteem,” she explained. "That’s why we hope to see a large vulva statue ​ parading​ ​at the Shinto festival​ next year alongside the ​wonderful​ phallus symbols​ ​.​" 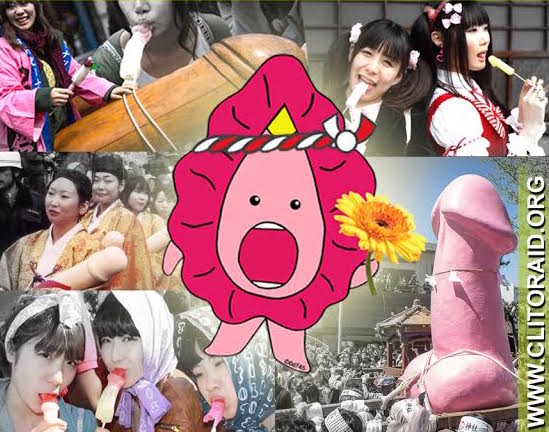