On Thursday, Feb 7, one day after the United Nations' "Zero Tolerance Day for FGM," Dr. Ted McIlvenna of the Institute for the Advanced Study of Human Sexuality invited Clitoraid's head surgeon, Dr. Marci Bowers, M.D., and Nadine Gary, Clitoraid's head of communications, to give a presentation about Clitoraid's humanitarian endeavors.

The presentation began promptly at 2:30 p.m. in the institute's amphitheater, with Dr. Bowers sharing with the sexology students about her surgical volunteer work with victims of Female Genital Mutilation (FGM) who contact Clitoraid to have their clitoris and other parts of their mutilated genitals restored. Dr. Bowers' surgical practice is in Mateo, about 20 minutes away from the institute in the Bay Area. To date, she has operated on close to 40 Clitoraid patients. She began volunteering for the charity in 2009, when she was still in Trinidad, Colo., where she had taken over a practice dedicated to gender reassignment surgeries in 2002. 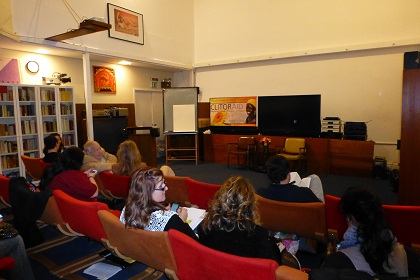 During her presentation, Dr. Bowers described the dangerous side effects of FGM, which has no known health benefits. Using slides, she showed and described some FGM cases she has treated over the last few years. She described the suffering of these women as they arrived in her office desperate to be whole again, and later described the post-surgical healing process. She also spoke about her own journey as a surgeon who learned the new FGM reversal procedure from her mentor, Dr. Pierre Foldes of France, who developed the technique.

She also spoke about her hope and belief that FGM will completely disappear worldwide within a generation, attributing this trend to the increasing amount of online communication between victims fed up with this barbaric tradition.
.
In her part of the presentation, Nadine Gary reviewed the history of FGM, which dates back several thousand years to the time it was practiced in Ancient Egypt. She then provided a geographical overview of where FGM (known euphemistically as "excision") still takes place. (The custom is especially prevalent in Sub-Saharan Africa, the Middle East and Indonesia.) Gary explained that 150 milllion women living today have been genetically mutilated and that some have migrated to Western countries, with about 300,000 currently living in the United States. 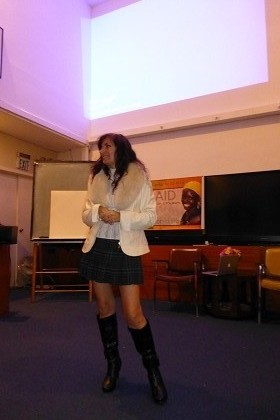 Gary then spoke about her own experiences working with the FGM victims who call Clitoraid seeking medical help. These women have told her in their own words about the unspeakable ordeal they endured in childhood and shared their determination to have the surgery and turn the page on the past.

Gary concluded the presentation with a video of Clitoraid's new "pleasure hospital" in Burkina Faso, West Africa, which is due to open in October. With the assistance of a volunteer medical team headed by Dr. Bowers, the facility will offer the clitoral repair procedure free of charge to any woman who wants it.

The audience was deeply moved by Clitoraid's efforts and several sexology students asked how they can assist Clitoraid once they become certified sexologists. In an ensuing discussion, ideas were exchanged that could potentially make a significant contribution to Clitoraid's sex therapy program for FGM patients.

Dr. Marci Bowers and Dr. Harold Henning are available for presentations at medical schools and universities.